A hard-working 1970s typeface comes back from the cold
From the type department.  Another strong feature of the New York Magazine anniversary issue (see the recent Eye blog) is the powerful use of the Egyptian Bold Condensed display font. It’s a direct reference to the original Milton Glaser / Walter Bernard design   of the magazine (see the 1973 cover, above, and feature spread, below). A bumpy ride with Alan Aldridge:The Man with Kaleidoscope Eyes
The Design Museum is hosting an Alan Aldridge retrospective, writes Roger Sabin. ‘Just go along to the private view,’ chirps the editor, ‘and blog a few hundred words about your first impressions.’ Hmmm. ‘Teaching history as a set of facts is only half the story’
More questions and answers about design history. Read our Eye 68 Q&A with Giampietro+Smith on the Eye site. How Mexico went for gold

A glorious rerun of the 1968 Olympics identity . . . with one omission
I had no idea until a friend mentioned it, writes Daoud Sarhandi. ‘Congratulations,’ he said, ‘the quotes look great.’ Quotes? What quotes? ‘Mexico 1968. In the museum … the Museo de Arte Moderno.’ And so Carolina Rivas and I went, with our daughter, into Mexico City to take a look at ‘Designing Mexico 1968: An Olympic Identity’. Although I hadn't revisited the subject since ‘This is Mexico … this is 1968’ was published in Eye 56 – or rather since I was forced to reply in Eye 59 to a critical letter written by Eduardo Terrazas and Beatrice Trueblood – I felt right at home among the artefacts and epoch in the museum. ‘I don’t believe in the myth of design geniuses, working on their own’
Above: Signage for Wiels Contemporary Art Centre, Brussels, made using traditional road sign printing techniques. Design: Sara De Bondt, 2008. Read our Eye 68 Q&A with Sara De Bondt on the Eye site. How photomontage created the architectural mirages of the 1960s
Top: Altar for the Temple of the Spirit (Sketch for the creation of an altar at the Institute of Kinetics) 1969-70 by Lev Nussberg and Natalia Prokuratov. Image courtesy of Jane Voorhees Zimmerli Art Museum, the State University of New Jersey. Who cares about graphic design history?
Now see this! Read our Eye 68 Q&A with Adrien Pelletier on the Eye site. Who cares about graphic design history?
Fresh content! Read our Eye 68 Q&A with Fraser Muggeridge on the Eye site. 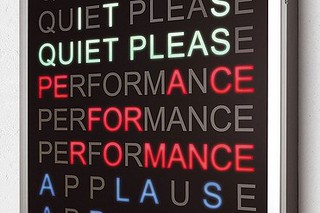 Does ‘Spin’ reduce graphic design to the level of art on a wall?
The Spin exhibition is small, free, easy to find (if you’re in or near London) and won’t take up too much of your time, writes John L. Walters.

Letter to the editor

Re: Afterword to ‘Googling the design canon’ – don’t diss the digital
From Mike Kippenhan The idea of inviting a variety of people associated with design to write about ‘neglected classics that take us “beyond the canon”’ resulted in an interesting and enjoyable issue of Eye (no. 68 vol. 17). It was refreshing to be introduced not only to some classics I was unaware of, but also to new contributors who have taken the time to share their ideas and interests.