What the client needs

US designer George Tscherny talks about his 56 years working with the School of Visual Arts. George Tscherny has had long relationships with many of his clients, but none has lasted as long as that with the School of Visual Arts (SVA) in New York. Their partnership began in 1955, when the SVA was still known as the Cartoonists and Illustrators School (C&I), the same year Tscherny opened his design studio. In the half-century since, while others have come and gone, he is still designing for the school.

Tscherny – born in Budapest in 1924 but raised in Germany – fled Berlin at the age of 14, following Kristallnacht, eventually landing in America in June 1941. Following the Second World War – during which he obtained his first understanding of design from a sergeant who had been a commercial artist – he studied at the Newark School of Fine and Industrial Arts, and the Pratt Institute in Brooklyn.

In 1955, C&I was expanding its courses to attract a broader student body. Tscherny, who had had a successful spell designing print advertisements for George Nelson at Herman Miller, was hired to teach the pilot class in Advertising Design, with a wider remit to design posters and announcements for the evolving school. Though his teaching career lasted only eight years, Tscherny continued to design promotional material for the school, and remains a consultant designer for SVA to this day. 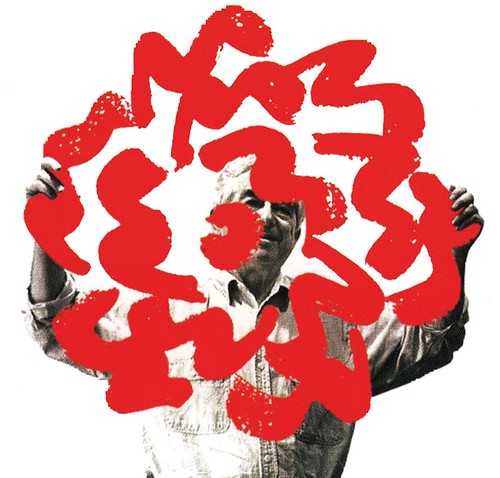 The witty imagery and uncompromising communication of his designs (both for C&I/ SVA and other clients, including Herman Miller, Pan American Airways, IBM and Johnson & Johnson) have played a vital role in the development of a distinctive US style. According to C&I founder Silas Rhodes, he ‘rescued American poster art from its banalities and raised it to the level of eminence formerly enjoyed by European posters only’.

Tscherny says he has been fortunate in his relationship with the school. ‘Throughout these many decades my primary contact with the school was Silas H. Rhodes, who passed away only a few years ago,’ he told Eye. Since then, Rhodes’ sons David and Anthony, with whom Tscherny had worked closely, took over executive roles, ‘making continuity fairly seamless’.

‘This was and is not the typical client-designer relationship. With large companies – like IBM – one tends to work with teams where members are constantly changed and re-assigned to different projects. We joked that IBM was an acronym for “I’ve been moved”.’

While management may not have changed much, the SVA itself has changed drastically in the past half-century. Tscherny says: ‘I have been a witness to and participant in the transformation of a vocational school into an institution for higher learning. The course offerings listed on my first C&I poster of 1955 included TV Art, Paste-up and Mechanicals. ‘Some 50 years later, the expansion in plant, equipment and programmes has been immense,’ he adds. ‘Paste-up and Mechanicals is not even a memory for today’s art student.’

And then there are the new course offerings, such as Design Criticism. ‘George Nelson, on whose staff I was during the early 1950s, was one of perhaps three people who could write about design in an astute and intelligent way. The notion that design criticism is now taught is astounding, and proof of how our profession has matured and is accepted in our culture.’

Inevitably, companies and institutions change management, identity and direction. ‘More often than not, consultant designers do not survive such changes,’ says Tscherny. ‘Perhaps one reason for this extraordinarily long relationship is that instead of falling victim to these changes I initiated them.’ Such changes range from a complete overhaul of the school’s identity in 1997 (42 years after his first poster) to the grid-based signage system introduced in 2011. ‘I am not the first designer to say “Don’t give the client what he wants, give him what he needs”.’

The most important factor in getting work accepted, he says, is credibility, a state that takes time to achieve, and must be renewed. ‘What helped in the case of the SVA was that it was unploughed, virgin territory when I joined it in 1955 … by 1963 I had achieved some semblance of credibility with Silas Rhodes.’

That credibility shows no signs of diminishing, as Tscherny is constantly working to move the school forward. His latest subway poster exploits QR (quick response) technology to provide ‘somewhat of a tease … the curious will find it hard to resist seeing who or what is behind this puzzle.’

While technologies may have changed, Tscherny and his own brand of playful communication still stand the test of time.